Having said my first build was at Downland Cycles, that’s not strictly true. Back in the dim and distant past we would bodge together anything with wheels. My old Grifter came in for some major abuse and a pretty horrid metallic green paint job!

When my youngest son got to school age I was looking for a safe way to get him there without having to watch him steer through the early morning traffic. Hence the BMX tandem was born. 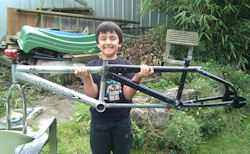 I thought one bmx frame was heavy. This thing weighs a ton, obviously! That said, it was fantastic way to ride to school and it’s still going strong.

Could do with a longer top tube for the stoker. It was fine when he was 5 but at 10 he gets a face full. 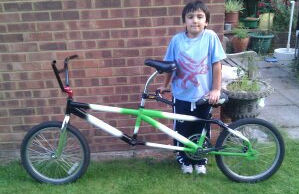 I had some paint left over from a Kawasaki KR-1s project so a kind of camo green, white, black effect was born.

I don’t suppose it will be long before he’s riding it with his mates. Well let’s hope so anyway. That reminds me, I must rob those Cinelli bars for my single speed first.

It was great to use at the school bike ride we organised. Katie and Georgie having a borrow. 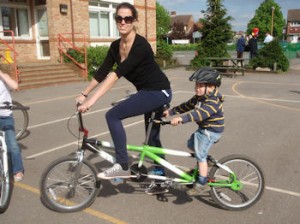 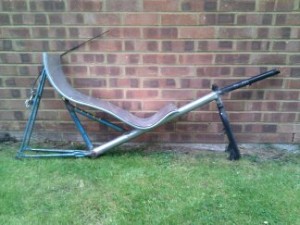 Whilst trying to reduce the number of bikes and bits in the shed, I accidently had a go at creating a recumbent. Half Peugeot racer, half BMX and half finished. I have slowly amassed the bits to complete it which might just happen one day. It’s now all one colour, although that is primer grey, so it wouldn’t take long to finish it off.

In the mean time Tomo Bikes is live and building……………… 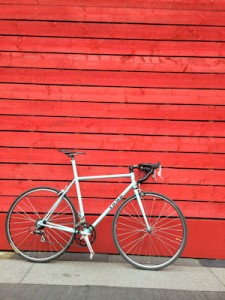 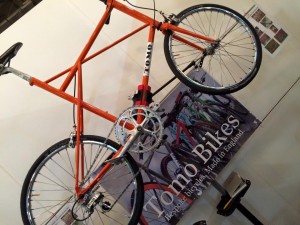