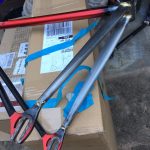 One of our race team has a rather nice Cinelli Gazzetta that had unfortunately broken its chainstays. Both had split near the bottom bracket. We had tried a quick repair in the past but it didn’t last so it was time to replace them with some new metal. A couple of new Columbus Cromor stays brazed in whilst also straightening out the rear end. Job done.